You are using an outdated browser. Please upgrade your browser to improve your experience and security.

Question: Which lawyer and presidential adviser in 1969 became the only Supreme Court justice to resign under threat of impeachment?
Answer: Abe Fortas resigned after it was disclosed that he had received a secret yearly stipend to advise the foundation of a Wall Street financier who had been imprisoned for securities fraud. His nomination to become chief justice of the Supreme Court had been rejected by the Senate the previous year.

Question: Which U.S. senator in 1969 drove his car off a bridge in Martha's Vineyard and fled the scene of the accident, which resulted in the drowning death of Mary Jo Kopechne, his 28-year-old companion?
Answer: Ted Kennedy's self-described "panic" and his failure to report the accident on Chappaquiddick Island to police for several hours permanently damaged his reputation and contributed to his decision to not seek the U.S. presidency in 1972.

Question: Which long-serving Democratic politician resigned his chairmanship of the House Ways and Means Committee in 1975 after admitting to an extramarital affair with an exotic dancer known as Fanne Foxe, the Argentine Firecracker?
Answer: After Wilbur Mills's speeding car was pulled over by police in Washington, D.C., Fanne Foxe, a passenger, jumped into the nearby Tidal Basin and had to be rescued. Mills soon entered treatment for alcoholism.

Question: What was the code name of the late 1970s undercover criminal investigation of several U.S. elected officials that involved FBI agents posing as an Arab sheikh and his retinue?
Answer: Abscam resulted in the convictions of one U.S. senator, six U.S. representatives, and several local officials on charges of bribery, extortion, and conspiracy.

Question: What was the name of the team of White House staff members that President Richard Nixon assembled in 1971 to collect damaging information on Daniel Ellsberg, the military analyst who leaked the Pentagon Papers?
Answer: The plumbers, so called because it was their job to fix leaks, broke into the office of Daniel Ellsberg’s psychiatrist and later into the headquarters of the Democratic National Committee at the Watergate complex.

Question: Which governor and former crusading state attorney general was forced to resign in 2008 after federal investigators discovered that he had been a frequent customer of a high-priced prostitution ring known as the Emperors Club VIP?
Answer: Eliot Spitzer, the former “sheriff of Wall Street,” had promised to clean up state government. Instead, he merely soiled himself.

Question: Which White House secretary in 1987 testified to Congress about helping her boss, Oliver North, destroy incriminating documents related to the illegal transfer of U.S. funds to the Nicaraguan contras in the Iran-Contra Affair?
Answer: Fawn Hall used the office shredder, which eventually jammed. She also smuggled documents in her boots and skirt to give to Oliver North. She was granted immunity from prosecution for her testimony.

Question: Which high official of the George W. Bush administration was convicted in 2007 of lying to a grand jury and to agents of the FBI in connection with the Valerie Plame affair?
Answer: Valerie Plame had been exposed as a CIA agent in retaliation for her diplomat husband’s public allegation that the administration had distorted intelligence reports to justify the 2003 invasion of Iraq.

Question: Which governor was sentenced to 14 years in federal prison in 2011 for attempting to sell an appointment to a recently vacated U.S. Senate seat?
Answer: Rod Blagojevich was recorded as saying “I’ve got this thing and it’s [expletive] golden…and I’m just not giving it up for [expletive] nothing.”

Question: Which U.S. politician fatefully (and falsely) declared at a press conference in 1998: "I want you to listen to me.…I did not have sexual relations with that woman."
Answer: Bill Clinton became the second president to be impeached, though he was acquitted in the Senate. The woman in question, Monica Lewinsky, became a celebrity. 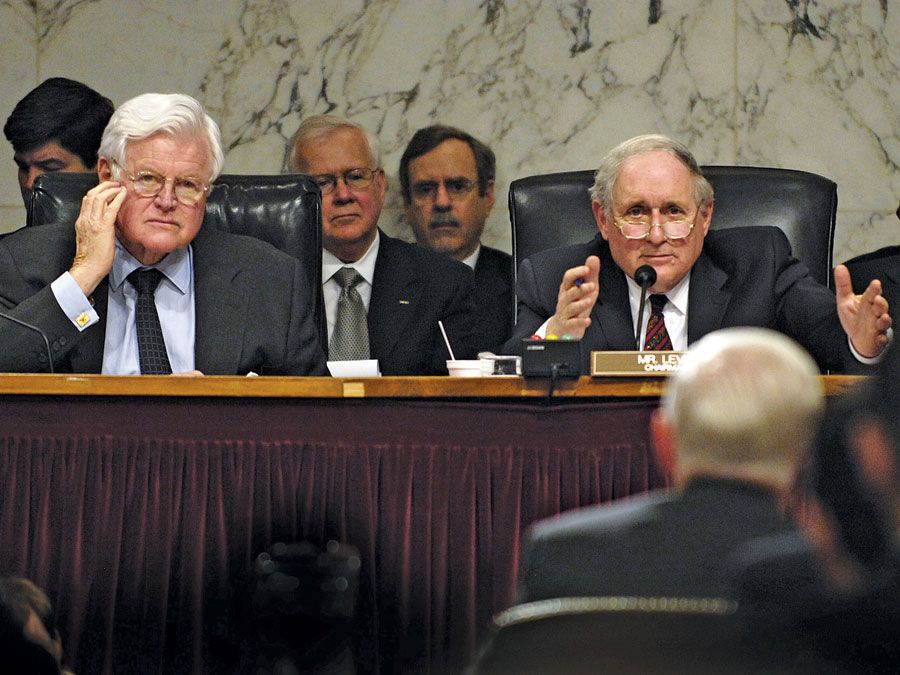 How much do you know about political scandals? Test your knowledge of public officials behaving badly.

You have {{ vm.secondsPerQuiz }} seconds to answer each question. The faster you answer, the higher your score. When you're done, try again to beat your best score!
Facebook Twitter
:{{vm.state.secondsLeft|fixedLength:2}}
QUESTION {{(vm.state.currentQuestion + 1)}} of {{vm.questions.length}}

Technology
Can You Hear Me Now?
Browse All Quizzes
Your results
Question Question {{($index + 1)}}
Your Answer:
{{vm.state.responses[$index].isCorrect ? 'Your' : ''}} Correct Answer:
Are you a quizmaster?
Share Your Score:
Facebook Twitter
Compare your score
Max Score: {{vm.maxPoints}}
New Best Score!
{{vm.state.score|number:0}}
{{vm.communityAverage|number:0}}
Your Score
Community Average
High scores
Login or Join to track your quiz stats, save your best scores, and compete with the community!
Your preference has been recorded
Our best content from the original Encyclopaedia Britannica available when you subscribe!